Last night I was in a "Polish" mood and thought that I would check You Tube to see what I could find. Usually my first inclination is to think about something related to my grandfather's parish, Niwiska, so I typed that in the search box and found a couple of wonderful videos posted recently.
I was not disappointed in these videos and would like to share one of them here.
Posted by Waleria at Sunday, October 11, 2009 1 comment:

Meaning of the surname Warunek

Quite often we like to know about the origins of our surname. For most people, their last name has been derived from a place, person, occupation, animals, nature, food and beverages, or foreign source.
William F. Hoffman's book called Polish Surnames: Origins and Meanings, is the best reference for Polish researchers to use when trying to get a grasp on their surname.
The surname Warunek is a funny sounding kind of surname which does not fit any of the above categories. In Iwo Cyprian Pogonowski's Polish-English, English-Polish Dictionary, the meaning of Warunek is condition, requirement, term, stipulation or circumstance.
I can only imagine where or how the surname originated. The earliest records found for anyone with this name were for Josephus Calesantius Warunek who lived in Gura Humora, Bukowina in the early 18th century. Today this is the country of Romania. In the ancestral village of my family, Hucisko which is in the parish of Niwiska, the first Warunek found was Andreas in 1794. The sources for this information was obtained through microfilmed records of the Mormon Church.
In 2002, Kazimierz Rymut developed a database with surname distribution in Poland. According to his research, there were 223 persons living in 37 counties with this surname. This included 106 men and 117 women. http://www.herby.com.pl/
Another online resource which we can use is http://www.moikrewni.pl/ To use this site, click on the English flag on the top right side and search away!
Posted by Waleria at Monday, February 16, 2009 No comments:

As researchers, we are often interested in the surnames from surrounding area where our ancestors lived. My father's family came from Hucisko, Poland in the parish of Niwiska, near Kolbuszowa.
Before I began researching my grandfather's family, the only surnames that I was aware of was Warunek and Opiela or Zadlo, but as the quest continued over the years, more names were added.
This information came from a baptismal certificate which was issued in the late 1940's and a typed form which gave basic names and dates.
The parents of Jozef Warunek, my grandfather, were Jan and Anna Zadlo, although for many years we thought it was Anna Opiela. It is written that way in some of the church records in Detroit but have no supporting documents from Poland to prove otherwise so I have to go by the names on Jozef's baptismal certificate.
Once I learned about the wonderful collection of microfilms preserved by the Mormon Church, I was able to further investigate my ancestors. I could only hope that all the years I needed to look at were microfilmed by the Mormons. As time passed, I found out that was not the case, but that is another story.
By spending countless hours viewing microfilm 0996700, I was able to extract many surnames connected to my branch of the Warunek family and others. This roll covers the years 1785-1855.
Some of these surnames are: Bialek, Cebula, Cwanek, Dluzen, Dziewit, Guzior, Kasza, Jemiolo, Kuca, Kuna, Mazur, Opiela, Regula, Saj, Staron, Swider, Warunek, Zadlo, Ziemba, Zielinski and Zuba.
Posted by Waleria at Sunday, February 01, 2009 2 comments: 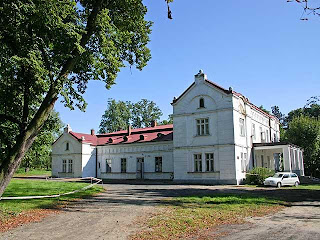 My grandfather Jozef Warunek, was born in Hucisko on August 31, 1889 and baptized one day later, September 1, 1889 in the parish of Sw. Mikolaja in Niwiska. His parents were Jan Warunek and Anna Zadlo. We knew that he had a brother Frank who lived nearby and another brother, Valentine who lived in . We heard stories that Valentine came to visit here but not much of anything else was known about him.

We had copies of Jozef’s baptismal certificate, thanks to my father, but it was years before I realized just how valuable it was to have this document. It was a starting point for me and one less bit of information that had to be tracked down once the search began seriously. I knew the name of the church where he was married and the places where the family lived and died, but I didn’t know much about his life in . Discovering and making use of the Internet really changed everything for me. I became aware of the and the resources at the Library of Michigan. Until that time, researching took place at the Burton Collection by using census records and city directories. I had everything that I wanted to know about my grandfather’s life here in the States, now I needed to embark on a quest to discover more about his life in .

I began using the Internet by doing simple searches on surnames and signed up to use message boards. In doing this, several connections were made and much data was collected. It seemed logical to take the next step and join the Polish Genealogical Society of Michigan with the hope of learning more about my heritage and research techniques.

I met friendly people who were on the same journey as me who were researching their families in and the area. It was always exciting to speak with someone who had ancestors in the same vicinity as mine. Meetings were held monthly and I would attend them as my schedule permitted. The Polish Eaglet, which is the Society’s journal, was another source of information and tool for me to use. I found out that Robert Postula, had already been researching in the parish of Niwiska and extracted surnames from FHC microfilm #0996700. The surname list was printed in the September 1998 issue. I could hardly believe it when I saw my surname, Warunek in this article and knew that I had to contact him about it. My surname is not a particularly common name here or in . We exchanged e-mails, pedigree charts, group sheets, vital documents and had countless discussions regarding the families from that area. Eventually, we discovered that our ancestors were married to each other.

The next logical step in my quest to learn more about family was to combine my love of travel with genealogy and return to . My husband, Tom and I had already been to in 1985. It was a bus tour of , , , and . It would be interesting to see the changes there since the fall of communism. In February of 2003, my husband and I left to visit once again except for this time; we stayed with Chris Warunek and his family in Kozy, rather than in a hotel. He and his family drove us to Hucisko, Niwiska and Huta Przedborska. There we stayed with his cousin in Huta Przedborska, visited families in Hucisko and went to the in Niwiska. Chris also translated for us the whole time as most of the people we met did not speak English. I will always be grateful to him and his family for their kindness and hospitality.

Unfortunately we were not able to meet with the pastor at Sw. Mikolaja Biskupa, but I left a letter with a request for information about my family. A few months later, he sent baptismal certificates of my grandfather, his brother and the birthdates of their siblings. We were unaware of siblings except for Valentine, and even then, the stories were sketchy and incomplete. These baptismal certificates contained more information about my grandfather than the previous one.

By using these typed baptismal certificates and the extracted names from the microfilm 0996700, I was able to link the Warunek family to Andreas, my fifth great grandfather. These certificates spurred me to searching for the other siblings, Zofia and Ignacy. I found Zofia living in but have yet to find anything on her brother Ignacy. Two other surnames, Staron and Wnuk were added to the family tree.

Traveling to brought me full circle in the search for my Warunek ancestors. It was deeply emotional and an experience which I will never forget. 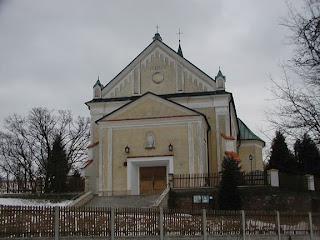 Niwiska, with Hucisko, village, district of Kolbuszowa, lies in a sandy lowland (289 meters elevation), on a field in the midst of deforested coniferous woods. The highway from Kolbuszowa to Preclaw (11 kilometers) runs through the village and a stream flows into the Swierczówka River (which, father on its course, is called the Przyrwa) then into the Lega River. In the center of the village stands a brick church, to the north a windmill and brickworks, while to the east is an abandoned glassworks behind which is found the hamlet of Hucisko which was founded by metallurgical settlers. Niwiska has a mission parish which belongs to the church in Rzochów, a public school 1-class, a community loan office with assets of 408 zloty (Austrian Currency), 1,198 Roman Catholic residents, 66 of whom work on the estate owned by Kazimierz Hupko. The property consists of 615 mórgs of fields, 147 mórgs of meadows, 112 mórgs of pasture land and 1,478 mórgs of forests; the lesser domain consists of 1,805 mOrgs of fields, 291 mOrgs of meadows, 249 mórgs of pasture land and 403 mórgs of forests. The present church was erected in the year 1876, replacing the wooden structure built in 1595. In addition, a brick chapel built in 1874 stands in the cemetery. The parish (Diocese of Przemyl, Deanery of Mielec) embraces Debrzyna, Hucina with Zabien, Leszcze, Hucisko, Poreby, Trzen, and Zapole. The population numbers 3,512 Roman Catholics and 141 Jews. Besides agriculture, the inhabitants are engaged in cabinetmaking and turnery (the art of forming solid substances into cylindrical or other forms by means of a lathe). In the 16th century, Niwiska belonged to the Lubomirski Family. In 1680 it was obtained by the Jesuits of Sandomierz for 15,000 Polish zloty, which they later loaned from the Bobola Foundation to Aleksander Lubomirski, voivode of Kraków, for the education of 12 students from the aristocracy. After the suppression of the Society of Jesus, the monies were placed in an educational find which was eventually sold. Niwiska borders on the east with Trzenia, on the north with Zabieniec and Hueina, on the west and south with many coniferous forests.